Hi Everyone, and welcome to “The Sounds Inside My Mind.”

There is a quote from the late Harold Bloom which I thought of when I came up with the name for this channel. The quote, from Anxiety of Influence, follows an analysis of an excerpt from Vico about poetry and divination. It makes the argument that, beyond anything else, the longing that is at the heart of poets, poems and poetry involves “a homesickness for a house as large as [one’s] spirit.”

A homesickness for a house as large as one’s spirit. I love the music of that phrase, and of course the meaning as well. And, for me, it suggests what I want to do with this “microcosm,” as well as why I named it what I did. For, to my mind, the phrasing hints at a kind of roominess or spaciousness. It suggests that we use words and concepts to describe countours and colors of our inwardness, our – to use a word from Elizabeth Bishop – interior, which is bigger, looser, brighter, and more fluid than words and concepts will ever be. John Ashbery put it this way:

In other words, Ashbery’s “wanting” is Bloom’s “homesickness”; Ashbery’s “dimension” is Bloom’s “house as large as one’s spirit.” Both quotes do not mention language, though both are indirectly quite concerned with it – with both its limits (to give a dimension, but not the dimension; to feel a homesickness rather than a sort of home-un-restlessness) and its possibilities (to use language to give a dimension, to house the spirit, if only momentarily, in a home). And of course, both formulations are using words to attempt to get at something (the longing, the thing that hurts) that unfixes words, “unstiffens [them], limbers them up and sets each one at work,” as William James put it in the context of his philosophy of pragmatism. .

Music is a good analogy here, because music can speak to us us without language. Or, if it does use language – I’m thinking right now of a fabulous song like “Da Doo Ron Ron (When He Walked Me Home)” by the Crystals – then the words seem less important than something that we might as well call “feeling.” I mean, think about the words to that Crystals song:

Why “da do ron-ron-ron, da do ron-ron”? Because the intense and wonderful feeling that that song’s melody and “wall of sound” produces – an intense and wonderful feeling echoed by the song’s story, of the “I” falling in love – is not exactly expressible in words or concepts. Words and concepts point to the feeling, but they don’t capture it exactly. Even the non-nonsensical words of the song – “Somebody told me that his name was Bill,” say – seem, in some ways, sort of throw-away, random, as if the words were arbitrary compared to the less arbitrary feeling.

But of course there are also examples of music where the words are not as random. And for me, much of Dylan’s body of work is a great example of this. “One Too Many Mornings,” for example, since that’s what “the sounds inside my mind” is taken from:

For “the sounds inside [one’s] mind” to shatter the night implies, like Bloom and Ashbery, a sense of a kind of largeness, homesickness, wanting – even, in the case of Dylan’s song, a form of violence, which hints at the unspeakably intense proportion of that wanting, that homesickness. All three artists, in other words, are seeking satisfying-enough forms to fit their feelng, the dimension of their wanting. What is the relationship between Jerry Garcia’s solo on “Tennesse Jed” and Milton’s Paradise Lost? How would one describe or characterize not only a digital co-operative, but a co-op that emphasizes the visionary above all else? What does it mean to say that abstractions are dangerous, and how do we fight against them using language and narrative? I feel like these questions are important, but I am not really aware of many publishing venues online that are interested in works that address these sorts of things. “Sounds” is intended as a space to ruminate, in a room that is large enough to ruminate. In the end, we are all “one too many mornings / and a thousand miles behind.” But that doesn’t mean we shouldn’t wake up, anyways, and try in our way to give a dimension to life.

MicroCosm: The Sounds Inside My Mind

END_OF_DOCUMENT_TOKEN_TO_BE_REPLACED

More in The Sounds Inside My Mind 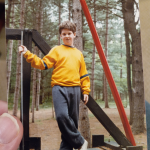